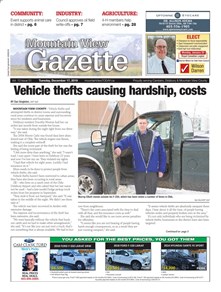 Mountain View County is largely an agricultural-based rural municipality with significant oil, gas and forestry industries operating within it. The Gazette is the only newspaper giving such broad coverage of the events, people and municipal politics shaping the development of the region and the attitudes of the county’s 13,074 residents.

The Gazette’s editorial content mirrors the communities it serves so you will find regular updates on agriculture issues and features on our local farms and producers. Carstairs, population 4,077, Didsbury, population 5,268, and Cremona, population 444, are urban centres located within Mountain View County that act as service centres for the rural area. After amalgamating the Didsbury Review and Carstairs Courier into the Gazette in 2016, the regional newspaper has become the go-to place for readers to catch up on the happenings of those communities.

Find coverage of high school and community sports as well as the decisions being made by each of the communities’ municipal councils in the Gazette. It also features articles about community movers and shakers and little-known organizations that have far-reaching impacts on their communities and beyond. The Mountain View Gazette is also included as second section in the Olds Albertan and Sundre Round Up, extending its reach into homes and businesses in Olds, Sundre, Bowden, Torrington and Wimborne.

Before coming under the ownership of Mountain View Publishing, a subsidiary of Great West Newspapers, at the end of 2005, the Gazette name has a long tradition of serving the area since the 20th century.